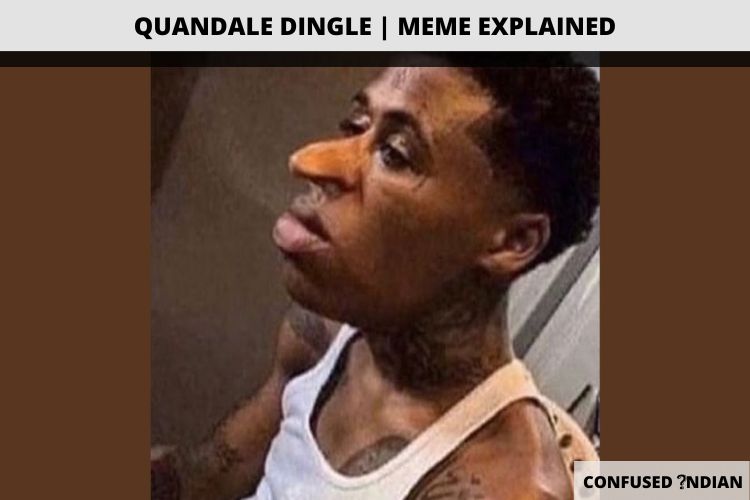 A high school football player from Pennsauken by the name of Quandale Dingle has been the subject of several silly ahh shitpost memes that were inspired by a widely shared screenshot of a user’s PC login page. The first documented upload of the screenshot was on TikTok in September 2021, where it quickly became viral through reposts, sparking many memes highlighting the name and how ridiculous it appeared. Individuals started utilizing distorted photographs of real people to depict Quandale Dingle memes in late 2021 and early 2022, primarily images of rapper NBA Youngboy. As a result of the moniker, a trend of imitation RapTV posts about Quandale has emerged on TikTok.

Who tf goofy ass name is this bruh? is written in black letters above the screenshot shared on TikTok by user @asapfeet on September 13, 2021. The video had over 18,600 views in just six months. Supremecheetos, an Instagram user, shared a cropped version of the meme on September 14th, 2021. On appease the affluent guy, the meme was uploaded to the Facebook page Memes that day. Within six months, it had received over 1,000 shares and 2,000 replies. The post, which was made by Instagram user memixes on September 18, 2021, gained over 32,000 views in just six months. It was a repost of a 21st-Century Humor compilation from the private TikTok account @remsoios.

Additional memes addressing the name were inspired by its peculiarity. Pastor.flacc, an Instagram user, published a photo of a dog on September 23 with the name underneath. In just six months, the picture had over 2,900 likes.

In a similar amount of time, on September 27th, Instagram user ecco2ksdirtytoiletwater posted a photograph with the screenname “Aidan Dookie” and wrote in the description, “goofy ass name bruh quandale dingle,” garnering almost 3,600 likes. M3meGoblin, an iFunny user, posted a satirical image macro with the caption “my pal Quandale Dingle” and an image of a Black man on December 20th.

On February 3rd, 2022, it was reposted to the Instagram profile daddy chungles, and within a month it had received over 9,500 likes.

Using a photograph of Twitter user @ayedocc seated on a set of stairs with a distorted head and hands to symbolize Quandale Dingle, TikToker @seggs.guy created a parody of a RapTV-style news post about Quandale Dingle meme on February 12, 2022. The video received over 26,000 views in a month.

Is Quandale Dingle a real person?

A real-life football player named Quandale Dingle wears the number 25 for the Pennsauken squad. Despite this, Quandale Dingle is not depicted in the most widely shared photograph online. It’s a picture of NBA (Never Broke Again) Youngboy sitting on a chair. His nose truly isn’t that huge, but the photo has been altered to give the impression that it is. NBA YoungBoy is an American rapper born Kentrell DeSean Gaulden. A shot of him seated on a chair apparently went popular when someone photoshopped his nose to make it wider, and it turned into Quandale Dingle meme.

A series of silly ahh shitpost memes featuring a Pennsauken high school football player by the name of Quandale Dingle were inspired by a widely shared screenshot of a user’s PC login page. The earliest known screenshot upload was made to Twitter in September 2021. It quickly gained popularity through reposts and sparked other memes that made fun of the moniker and how stupid it is. Individuals started representing Quandale Dingle memes in late 2021 and early 2022 by utilizing distorted photos of real people, primarily Black guys. As a result of the moniker, a trend of imitation RapTV posts about Quandale has emerged on TikTok.