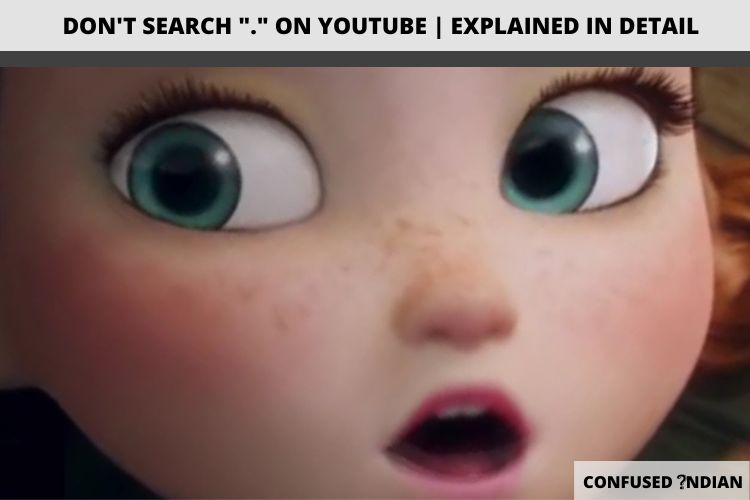 Don’t Search “.” on YouTube It is a peculiarity of YouTube that when you type one or more periods, also known as full stops, into the search bar, the bar will automatically fill with odd suggestions. Some of these suggestions may direct visitors to spooky, allegedly illegal, and unsettling films with titles that contain an apparently random mix of symbols. These videos are suspected to have been uploaded with these titles in order to avoid detection by the YouTube moderation system, which would otherwise detect unlawful or copyrighted content. Some YouTubers have also uploaded shitposts to the site with the title “Full Stop Punctuation” in order for them to show when a user searches for “.” Similar to Don’t Google memes, the fad evolved into an online social game or challenge in 2020 and 2021.

When visitors enter “.” also known as yes it’s a full stop in the YouTube search field and click Search, they will be taken to a seemingly random collection of videos. This appears to have been mentioned by YouTubers who uploaded shitposts with the title “Full Stop Punctuation” to the site. For instance, YouTuber Coouge’s senseless Frozen spoof, which was uploaded on August 10th, 2017, has amassed over 6.4 million views over the course of four years.

Although it appears that videos with weird characters in their titles have been posted to YouTube for years, discussions regarding “typing ” into YouTube” started popping up on Reddit around 2019. On March 1st, 2019, Redditor reeveomega wrote that they had found a number of Elsagate-style movies by using the search engine’s suggested results after typing “.”

In 2020 and 2021, the phenomenon of inputting “.” onto YouTube became more well-known. A video by SomeOrdinaryGamers from January 28th, 2020, which studied the results of typing a period into YouTube, has received over 1.2 million views in around two years.

By entering the period mark in their reply to ElsaGate on May 10th, 2020, Redditor DontAskWhoBenIs displayed a number of movies with Arabic titles that read, “woman pretends to be the Virgin Mary.” The majority of these films, according to commenters there, are worthless memes with clickbait thumbnails to attract quick views.

Several YouTubers investigated the phenomena in 2021. Mr Ferrante, a YouTuber, made a video about the issue on August 23rd, claiming he saw videos so horrible that he wouldn’t dare discuss them in his video. Videos with titles like “… ùù„… £oùù ù„ù„£ù ù„… ù„ù ù” had the most unsettling content. In just three months, his video received over 1.1 million views. The majority of the films that came up in the search, according to a post by YouTube user YourEveryDayTheorist on October 31st, were well-known disturbing viral videos or shitposts that had amassed over 310,000 views in around two weeks.