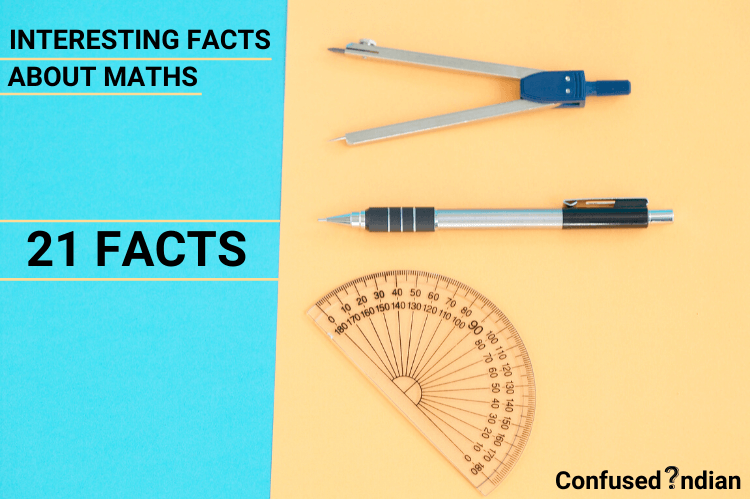 Interesting facts about maths that make it more mesmerizing “Pure mathematics is, in its way, the poetry of logical ideas,” said Albert Einstein.

If you are a fan of mathematics, you will understand what he wants to say. It is true to an extent, take any math formula or equation; if you observe it, you will feel the rhythm; every line of the equation looks like verses of a poem. It posses that kind of affection; math is like a magical box. It hosts many intresting facts about maths, but not for everyone.

For some people, math is boring and the most hated subject in their school life, though math is as pure as our existence.

There is no escape from Mathematics, you can love math, or you can hate it, but you can’t ignore it. It is everywhere. It is omnipresent, and there are numbers, patterns, equations, and formulas in everything around us, in every atom in this universe and beyond it. That’s the fact about math.

As old as time, the great mathematics has many surprising facts, we encounter some of them in our daily lives, and some are just amazing. Below are some interesting facts about mathematics in daily life that will make you fall in love with Math again.

There is no representation of zero (0) in Roman numerals.

The earliest evidence of math was stretch as back as 3000 BC. Sumerians are the oldest known civilization in Mesopotamia who develops the complex system of metrology which makes it one of the most interesting facts about maths.

3. Much older than you think!

There is another evidence that humans using math were traced back to 30000 BC, there were markings on animal bones that led to this epiphany. It is one of the most amazing facts about maths.

Zero first appeared in Mesopotamia around 3 B.C.; it is later used in India around the mid-fifth century. It is one of the most significant mathematical facts.

There is an ‘E’ in the spelling of every odd number.

If there are 23 people in a room, there are fifty percent chances that two people among them have the same birth date; this one one of the most interesting facts about maths.

Every time a deck of cards shuffles appropriately, the outcome may never have occurred in history ever, not everyone knows about this interesting fact of math.

Pentagon (the military headquarter of USA), designed with five sides, depicted its meaning. An icosagon has 20 teams.

If you are adding opposite sides of a dice, the result is always seven—one of the most interesting facts about mathematics in daily life.

A light-year is equal to the distance light travels in a year. It is one of the most interesting facts about maths.

15. Infinite number of starts and galaxies?

The best part about the mathematical facts is that there are infinite stars, billions, or maybe more galaxies. However, the still recognizable and unrecognizable universe contains more percent of black voids, or ‘the great nothingness.’

The universe is vast, humongous, indescribable. It consists of infinite objects and billions or more galaxies. There may be 200-400 billion stars, and our earth is approximately 4.543 billion years old. That’s one more interesting fact about math.

Srinivasa Ramanujan, the greatest mathematician from India, had almost no formal training in Mathematics.

Though math is the most logical and systematic subject in the world, it also is the most hated subject among students.

19. What comes after billion?

After millions and billion there is a quadrillion, quintillion, sextillion, septillion, octillion, nonillion, decillion, and undecillion.

One of the most amazing facts maths is that trigonometry is the study of the relationship between angles of a triangle and it’s sides.

One of the most interesting facts about maths is that if you write pi to two decimal places, it will spell out the pie.

These are some of the amazing facts about maths among the infinite mathematical facts.

Mathematics is the answer to every unanswerable question, it is peculiar because it is robust and straightforward at the same time. For some, it is full of labyrinths, and for some, it is a way to ecstasy.

Mathematics is beautiful and you can make a career in maths as well; it is full of mathematical facts and certainties, which makes it so unique.

How To Choose A Career Path When Confused? Follow These 8 Steps: Confused Indian

How To Start A Blog In India | Blogging In India